Cookie preferences
This website uses cookies, which are necessary for the technical operation of the website and are always set. Other cookies, which increase the comfort when using this website, are used for direct advertising or to facilitate interaction with other websites and social networks, are only set with your consent.
Configuration
Technically required
These cookies are necessary for the basic functions of the shop.
Allow all cookies
CSRF token
Cookie preferences
Currency change
Customer recognition
Customer-specific caching
Decline all cookies
Individual prices
Selected Vehicle
Selected shop
Session
Comfort functions
These cookies are used to make the shopping experience even more appealing, for example for the recognition of the visitor.
Note
Statistics & Tracking
Affiliate program
Google (Universal) Analytics
Google Ads Remarketing
Google Conversions Linker
Track device being used
Vehicle Filter
Categories
Information 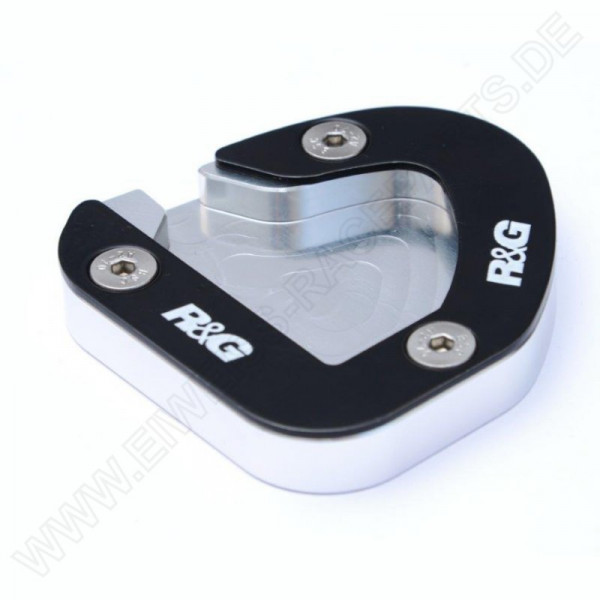 Kickstand Shoe's bolt onto the bottom of the sidestand, to enlarge the original’s footprint by up to 100%, significantly spreading the load placed upon it, to help prevent the stand ‘piercing’ the ground. Despite this enlargement, the Shoe does not affect ground clearance or interfere with the chain run during normal riding.

Available for nearly 100 different bikes, covering popular adventure, sports, nakeds and touring machines, each Shoe is bespoke to the intended bike and sandwiches the existing stand foot with an aluminium bottom level to prevent corrosion and is topped with a stainless steel lid for strength. The product can be fitted in minutes as it is clamped together with three countersunk Allen bolts.

This website uses cookies, which are necessary for the technical operation of the website and are always set. Other cookies that increase the convenience of this website, third-party cookies that are used for marketing and tracking purposes or to simplify the interaction with other websites and social networks are only set with your consent. Change your cookie settings or give your consent that we allowed to use all specified cookies by clicking "Accept". More information
Accept